The GT Battery Isolator from CARTEK is a very small and highly reliable alternative to the traditional mechanical master-switch and has been designed to overcome all of the problems and restrictions associated with mechanical and electro/mechanical safety cut-outs. When fitted to a race car our Solid State Battery Isolator simultaneously isolates the battery and kills the engine immediately when triggered in accordance with FiA safety regulations.

This system has been designed to simplify installation thereby saving time and reducing build costs.

The Cartek Battery Isolator GT provides two functions. The first is to disconnect the Battery from all Electrical Circuits. The second is to kill the engine.

The Battery Isolators work by being fitted in between the negative side of the battery and the chassis ( As seen above ). When the external kill button has been activated or the internal button been switched to the off state, then the Battery Isolator will disconnect the negative side of the battery from the Chassis. This means that no power can get to any of the electrical circuits as there is a break in the circuit. The Cartek Battery Isolator GT comes with built in alternator run down protection meaning no extra wiring and no extra components.

How Is It Controlled?

The two electronic isolation circuits are controlled by microprocessors and incorporate various safety systems including over-temperature and over-current monitoring. These microprocessors also monitor the kill switches/buttons for instant activation without false triggering. 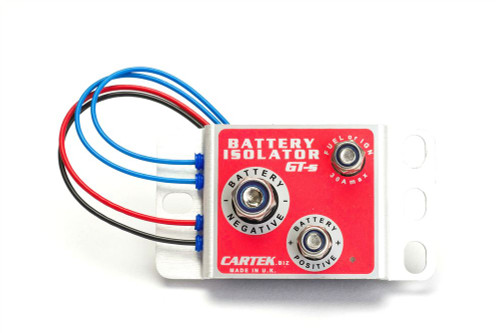