TO ONLY BE USED WITH MOTORSPORT ECU OR PDM

The XR Battery Isolator is the latest generation of motorsport master-switch devices from CARTEK. At 30% smaller size and 40% lighter weight than the previous ‘standard’ and GT isolators, this XR version offers even more benefits and performance when compared with traditional mechanical master-switches and electro/mechanical safety cut-outs.

The Cartek Battery Isolator XR provides two functions. The first is to disconnect the Battery from all Electrical Circuits. The second is to kill the engine.

Engine Kill
This unit does not have a power input or power output. Instead it sends a signal (12v 0.2a when on, switched to chassis/earth when off) which is wired up to either a Power Distribution Module or Motorsport ECU that has an ignition switch signal input. The ECU or Power Distribution Module will then shut down when it see’s this signal - which then kills the engine.

The Cartek Battery Isolator XR comes with built in alternator run down protection meaning no extra wiring and no extra components.

How Is It Controlled?
The two electronic isolation circuits are controlled by microprocessors and incorporate various safety systems including over-temperature and over-current monitoring. These microprocessors also monitor the kill switches/buttons for instant activation without false triggering. 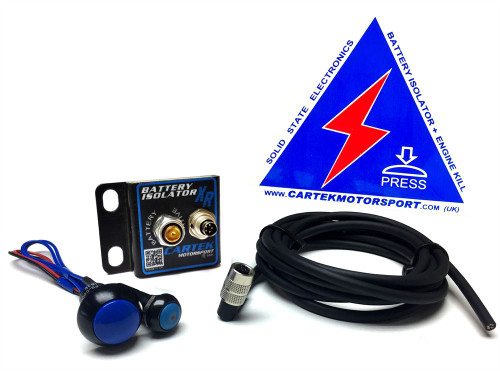